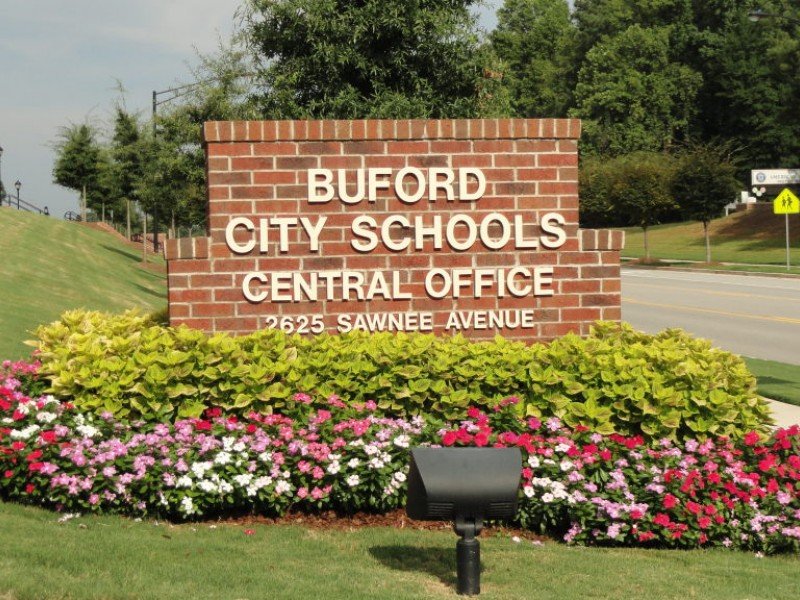 March 22, 2021 — The Buford Board of Education’s monthly meeting was called to order at 7 p.m. at the Buford City Arena by Chairman Phillip Beard.  Following the pledge of allegiance, the Board approved the agenda and the meeting minutes from Feb. 22, 2021.

The first item of business was the need to surplus 169 Lenovo Chromebooks which will be used for parts to keep the other Chromebooks in working order.

The Board approved the purchase of a new 2 ½ ton HVAC unit at the cost of $5,737 for Buford Academy. Science classrooms on the third floor at Buford High School need to be finished out to be usable.  Other classroom improvements are needed for the science labs at BHS, as well as at Buford Middle School.  The Board approved the expenditure of $169,500 to do the work needed. During special events at the Buford City Arena, the school district will rent a big blue curtain at the cost of $1,000 each time.  The school district asked the Board to be able to purchase their own curtain and truss for events like graduation at a cost of $3,505.  The purchase was approved.

One field trip request for FCCLA and four fundraising requests were approved by the Board.  The fundraisers include a car show at BMS, BHS wrestling selling senior yard signs, a fundraiser for Buford Senior Academy and for the BHS Band to be able to sell concessions during an event that they will be hosting at the Buford City Arena.

Jenny Poole said that Buford Academy’s Saturday School was helping on average 100 students and they recently started after-school help where approximately 30 students are getting additional instruction to try to bridge the gap in their education. BA is holding its book fair this week. Virtual parent-teacher conferences were a success. The Wolf-a-thon, BA’s annual fundraiser is scheduled to take place on Thursday, weather permitting.  The new principal for BA, Elena Hernandez-Vo will take over her full duties on April 1, 2021, and Mrs. Poole will go back into retirement.  The Board thanked Mrs. Poole for temporarily coming out of retirement to lead BA until a new principal had been hired.

Kaleen Pulley said that Read Across America Week was a big success at Buford Senior Academy.  BSA’s chorus will hold their Spring Chorus Concert next Tuesday at the Fine Arts Center.

Laura Beth Short announced that the Buford Middle School FCCLA placed first at their state competition. BMS held a virtual Career Day last week and despite the challenges to do with COVID, the event was successful. BMS is holding a Family Involvement Night on Mar. 25.  Students and their families can play a game of BINGO. Each student/family will receive a BINGO card and they will have to visit the local businesses on their card, find their teachers at the locations, turn in their cards after the last stop and be eligible for a chance to win prizes. The BMS Band had 10 students be named to All-State. Over 30 students participated in the Art Show at BHS. Fourteen school records were broken by the BMS Track team this season. The girls soccer team is undefeated at 6-0.

Teresa Hagelthorn updated the Board on the numerous events and news from BHS.  The JV Quiz Bowl team placed second at the state competition while the varsity team placed fourth. The state competition was held virtually this year. The BHS FCCLA club had eight students place either first or second at their national competition. The BHS chapter of FCCLA won the Financial Fitness Award and was recognized as an Honor Roll School with Distinction chapter. BHS received its AP results from last year and BHS was named an AP Honor School for 2021 and the school qualified for every category in which it was eligible.

In Athletics, the baseball team is currently undefeated and is the No. 1 ranked team in the nation by MaxPreps and Collegiate Baseball.  The boys and girls track teams have broken nearly 20 school records so far this season.  They compete at the Gwinnett County Championships this coming weekend.  The boys’ tennis team won the Grainger Invitational while the girls finished third.  The girls’ soccer team is currently ranked No. 2 in the state while the boys are currently 5-5-1.  The girls’ lacrosse team is ranked No. 9 in the state.  The boys’ lacrosse team’s overall record so far is 6-5.

The boys’ golf team won the Gwinnett Open this past weekend.  Jackson Buchanan was the low medalist for the second consecutive event this year.  On Sunday, JT Whitt and Matthew Stone won the GHSA State Qualifying Tournament on Lake Lanier catching a total of 18.68 lbs.  Riflery placed third at the Area Championship and are hosting the first round of state playoffs this Friday.  In late April, the BHS Gymnastics team will be hosting the GHSA State Championships at the Arena.  The gymnastics team is currently ranked third in the state.

The BHS Athletic Progam has now moved into first place in the Georgia Athletic Directors Association Director’s Cup standings with a total of 706 points.  Richmond Hill is not far behind with 706 points and then Pope with 621 points.

Dr. Downs informed the Board and attendees that the school district will be receiving $3.6 million in the American Rescue Plan Act Allocation (formerly known as the CARES Act) and will have until 2024 to spend it.  Dr. Amy Chafin, Assistant Superintendent for Student Achievement relayed the results from the Advanced Placement testing from last year.  Buford High School earned the highest awards in every category that they qualified for.

The superintendent’s administrative assistant, Amy Reed was recognized for her dedication to the school system as she retires after being on the job for over 30 years. Congratulations Mrs. Amy Reed.  We hope you have a wonderful retirement.  Thank you for your service to the school system and community.